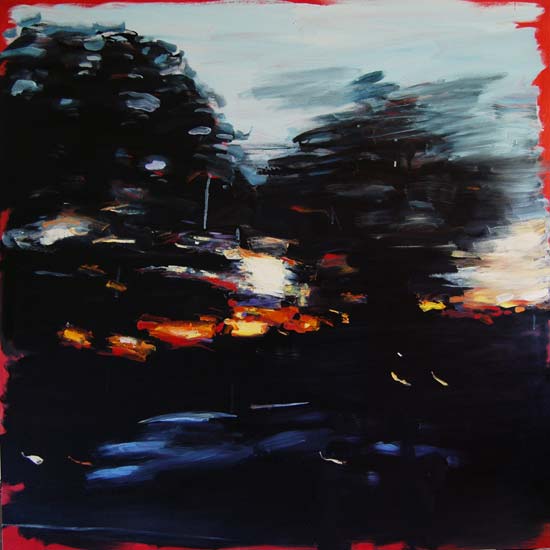 First meeting on an Internet forum in 2006, Amanda van Gils and Simon Collins, respectively based in Melbourne and Sydney, soon discovered common interests as artists and the parents of young children. The Going Places exhibition is the result of that ongoing supportive, professional association and a shared artistic sensibility towards the landscape.

With very different painterly approaches, van Gils and Collins explore the importance of nurturing a sense of place beyond the consuming busyness of ‘living’. Although painters first and foremost, both source imagery through photography. Those fleeting moments of an ordinary day are freeze-framed and then visually interpreted through the medium of paint back in the studio. In Collins’ case, inspiration came during the wintery evenings he spent watching his son’s soccer training at a local park. Much further from home territory, van Gils’ works present a record of one road trip along Queensland’s Bruce Highway.

Multi-layered in its associations, the show’s title infers more than family outings or long car journeys. Going Places encompasses the artists’ childhood aspirations and subsequent recognition and career achievements. Certainly, both Amanda van Gils and Simon Collins have already received considerable attention with the inclusion of works into some of the nation’s most prestigious art prizes, as well as international showings of their paintings.

What strikes one first about Simon Collins’ paintings is the utter confidence of his painterly approach. In scenes alive with energy and movement he depicts the day-to-day activities of life in the streets and parks of suburban Sydney: ‘The idea is to take some snaps during any ordinary day, see the poetry, take it home to the quiet of the studio and turn it into something more beautiful.’

Both surface and human document, each painting presents a small ‘slice of life’ that encourages us to discover that elusive something which defines the quality of our everyday existence. There are many ways to convey meanings beyond what we see. Collins’ selective use of visual facts, together with his expressive use of paint, channels us into different perceptions of reality. Collins shows us places where the optical noise of modern culture has receded into a mystery of dark shadows and forms caught in pools of wavering light.

Although Collins maintains his primary motive in painting is to reflect ordinary life experiences, there is a quiet but active paradox at work here: a strange mixture of regular family activity taking place in an incongruously eerie atmosphere. The scenes look real and dream-like at the same time. Glowing with an otherworldly phosphorescence, the figures appear to have lost their corporeality. The chilly night is alive with flickering forms that seem to move with a curious grace back and forth in the visual field. The dramatic play of light and dark, surrounded by areas of an intensely crimson ground colour is fixating.

Simon Collins understands well the correspondence between feeling, form and technique. His surfaces are rich and textured, with just enough visual information to permit identification. All inessential detail has been eliminated: ‘I have always scraped and left bits bare so as to incorporate the ground colour and I have become better at the less-is-more thing, braver about conceptions of what a finished painting is.’

The dynamism of the works derives from the directness of Collins’ execution. He is never hesitant, the paint is not pushed around indecisively or laboured – his brushmarks seem imbued with a life of their own. Collins muses, ‘I like to paint the whole canvas at once as each area is a relevant part of the puzzle. I’m never sure how the painting is going to work when starting out, the painting itself dictates – it tells you as you go. My aim is to let the medium carry me in a way that imparts the experience I’ve drawn upon, to take the viewer to that place, abstracted and embellished as it may be. I like the idea of letting the viewer in on this process through the often unfinished look of the works and the absence of explicit, defining titles.’